"They have done a great job with the Paddle-shift system and it worked flawlessly. The biggest advantage to the system is that it allowed me to concentrate more on driving the car more precisely."

"Thank you for the quick and professional service you provided!"

"It was great! The paddle shift makes the car easier to drive, and it worked perfectly."

"The Systems are working great. We just ran the SCCA run offs. Lee (Alexander) sat on pole with the track record and the fastest lap turned at Road America for any SCCA class."

"The down shifting is quite amazing. We are delighted with the newly installed PS2 system and it's the first time we have run the car and managed to stay beyond practice all season. We would definitely recommend you and your system to anyone who comes our way."

"We tried a pneumatic system initially but the results weren't very successful. The main problem was that the air canister wasn't sufficient. Because we're using a small-capacity, naturally aspirated engine without a lot of torque, we have to change gear a lot and sometimes there was a delay while we had to wait for the empty canister to be re-pressurised. It could be two seconds before the gearshift system worked again, in which time you might have lost three or four places on the track. With the solenoid it's instantaneous."

"Thanks for the PS3, absolutely fantastic, it's completely revolutionised the car! I thought the XTR2 was fun before but being able to change gear reliably and so fast, and without the clutch is superb. Drove my friend's Lamborghini Gallardo too and have to say the Pro-Shift is way smoother and faster than the Gallardo's somewhat jerky gear change. Gallardo's paddles don't move with the steering wheel either which makes finding them coming out of a corner interesting!"

"The test at Road Atlanta of the F1000 car went flawlessly. The PS3 system was awesome, no problems at all."

"I bought a complete PS3 System a year ago for my Speads RS10 race-car. It works like a dream!!"

"I was instantly comfortable using the PS2  for both upshifts and downshifts, and quickly found myself  setting very competitive lap times using the paddles as though I'd never used anything else. Downshifting from 6th to 2nd in 90m was effortless, undoubtedly helped by your advice to leave the gear changes for the second half of the braking zone. Admittedly years of computer simulation playing might have helped, but real cars are rarely that similar to virtual equivalents."

"The Paddle-Shift worked brilliantly and I am really happy with the installation. Once more thanks to you and Ian."

"The Pro-Shift system was installed in our car in a big rush and without us having had any previous experience of it. Mainly due to a total distrust of the previous pneumatic system we were not sure if the Pro-Shift would be fine but we were 100% positive that with the pneumatic system we would not finish our upcoming race at all. With only 6 laps to test the system we entered the car in its first endurance race, the Britcar 4 Hour at Donington. Having fantastic factory support, the creator of the Pro-Shift software Ian did some fine tuning between the wet and dry modes since the weather turned without warning at Donington. Suddenly we were second and led the race many times. We ended up 3rd in the GT Class 1 as we had voltage issues and an extra pit stop. However the shifting as incredibly fast and exact and characterised by extremely smooth downshifts. We didn't have one miss shift during the whole 4 hours. During the last 30 minutes of the race the car was running at only 8 volts but still the PS3 shifted without problems. With pneumatics the compressor would not have been able to pressurize the gear cylinder at less than 10 volts and we would have been out of the race. Back in Slovakia we looked at the transmission and could not believe it, not one dog ring damaged, not one part with any signs of wear. Thank you Roy, thank you Ian, you did an excellent job!"

"WOW WOW WOW!!!!! What a fabulous piece of kit. I ended up winning the race on my first ever time at Cadwell. What a fabulous circuit to race and even more enjoyable and fun to drive with the paddle-shift system. I would not have been so quick or felt in as much control of the car if I had to take my hands off the wheel. It was fault free, so perfect going up the gears and so smooth blipping when coming down. This makes the handling of the car under braking so much easier to handle. It is awesome Roy. Well done to you and your team."

"Pro-Shift Paddles are the best paddles on the market by far."

"Wow! what a weekend, this bit of kit is amazing, I shaved 1 second round Brands and that was in traffic, did a 46.4, it's the best investment I've ever made and what's more it made me enjoy driving more. The ability to keep the car more balanced through corners because I have both hands on the steering wheel and for the first time through clearway I could change gear without having to try and re engage gear. Thanks very much for designing such a fantastic bit of kit, Roy!"

"The Pro-Shift is working flawlessly with the blipper solenoid."

"We had the Ascari M5 out for the first test day of the season on Monday, the Blip System works great, we installed the system off the firewall and on to the accelerator pedal. We are very happy with the unit."

"Thank you for sending Ian over to Sebring, he did a great job and went above and beyond what I expected. He has built our relationship with Pro-Shift to one that we are glad to have."

"Huge thanks for all the help Pro-Shift have given me, a fantastic job, well done to all at Pro-Shift!!"

"Driving the new Pro-Shift PS3 is both exhilarating and exciting and will definitely give us the winning edge in our Renault Megane. The top of the range technology supplied along with the ability for us to make system adjustments from our laptop all add to the feeling that we are running a very high quality Gearshifter."

"The bespoke Porsche 997 GT Cup Car Pro-Shift System has cut seconds off my lap times and is a pleasure to use. The track-side assistance given by Roy and the Pro-Shift team was second to none when they attended Hockenheim to complete the final testing and fine tuning of the Gearshifter with me."

"We have been using our Pro-Shift to shorten lap times for 4 years. In addition to clean shifts it results in far less wear of gearbox dogs and shifter forks than manual shifting. Pro-Shift gives us a winning edge and their service quality exceeds my expectations."

"The PS3 shifts are seamless both up and down and will without a doubt shave seconds off my times at every track. It has exceeded my expectations in only its first weekend. You have succeeded in designing a cutting edge technology and delivering it to the Motorsports community."

"The gearbox internals look like new and no "swarf" on the plug which shows the Paddle-Shift engagement is spot on.... The  Pro-Shift System seems to be about the only part of the car we have not had a problem with - fitted and forgotten. As far as I can see there is absolutely minimal wear of any of the dogs on the rings or gears."

"I have used the PS2 to break 2 track records this year at New Hampshire International Raceway and Virginia International."

"I purchased a Pro-Shift System for my F1 Sidecar in 2007. We've never had 1 problem and I like it so much I've just bought a PS2 for my race car."

"The System we installed is working great!"

"Your Pro-Shift System works flawlessly. I love it."

"The Pro-Shift works perfectly. The downshifts were so smooth I had to look at the gear indicator to see that the shift had actually occured. One happy guy says thanks."

"I was at Goodwood on Friday using your Paddle-Shift for the first time... it was b****y brilliant, it worked faultlessly all day and having driven a pneumatic system and yours back to back the Pro-Shift was far smoother."

"It's an absolutely fantastic System to use. We've had 4 years of trouble free running."

"We needed a boost to our World Championship campaign and the Pro-Shift provided us with that bit extra." 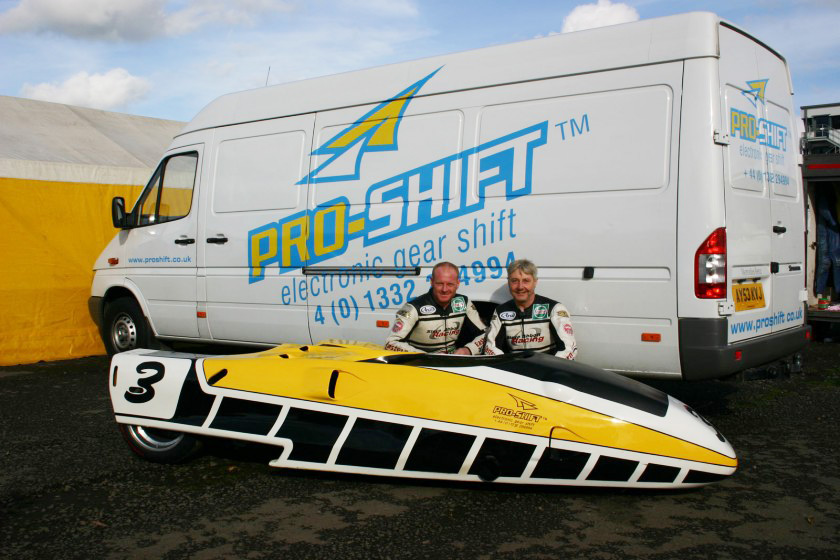